Naming of the Library

Centrally located on the campus of Lingnan University, the Lingnan University Library has the staunch support of the University and has received generous donations from different donors in the past decades for the extension of its services and facilities. In recognition of the donors' support, some key library spaces have been named after them including the Library itself. 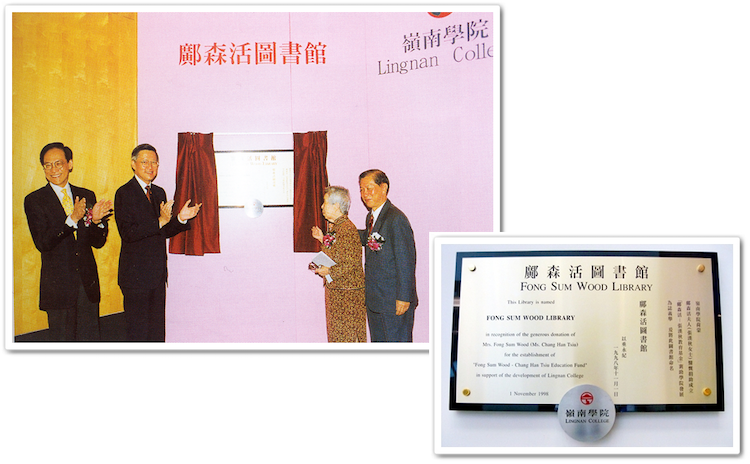 Mr Fong Sum Wood was a graduate of Lingnan University in Guangzhou. After the war, he taught English at St. Paul's Co-educational College. Mrs Fong taught at True Light Middle School of Hong Kong in the early 1950s. Then she taught physics at Ying Wa Girls' School from 1955 until her retirement in 1975. During those years, Mr and Mrs Fong educated and inspired many students to do their best and fulfil their potentials.

Mr and Mrs Fong led a simple life. They used their savings to buy stocks of Hong Kong companies that were worth around HK$20 million at the time of the donation. It was agreed that 70% of the annual dividends from these stocks would be used to support the development of the University and the remaining would be given to the three secondary schools at which Mr and Mrs Fong had taught for equipment and student awards.

The Dedication Ceremony of the Fong Sum Wood Library and Chang Han Tsiu Reading Room was held on 1 November 1998. The Hon Andrew Li Kwok Nang, Chief Justice of the Court of Final Appeal and who was one of Mr Fong's outstanding students, officiated at the ceremony. Other officiating guests included Mrs Fong Sum Wood, Dr Chiu Hin Kwong, Chairman of the Board of Governors and Council, and Prof Edward Chen, the President. About 150 guests and students of Mr and Mrs Fong attended. A dinner party followed the ceremony to celebrate Mrs Fong's 88th birthday. 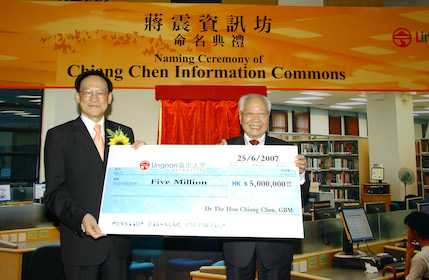 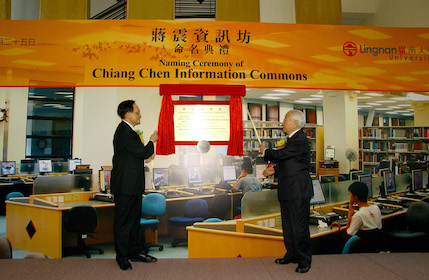 In 2007, Dr CHIANG Chen, Chairman of Chiang Chen Industrial Charity Foundation and The Chen Hsong Group, generously donated HK$5 million to the Lingnan University. The Information Commons located on first floor of the Library was named after him as "Chiang Chen Information Commons" which has been set up to provide a one-stop service to facilitate students and Faculty to gain access to e-resources through the multitude of computing facilities amidst the rich print collections of the Library and to provide reference and enquiry service by professional librarians. The space is further refurbished as a nice place to study.

In 2008, the generous gift from Mr. Lee Hak Kan has enabled the Library to renovate and upgrade the Multimedia and Language Learning Centre on the second floor.