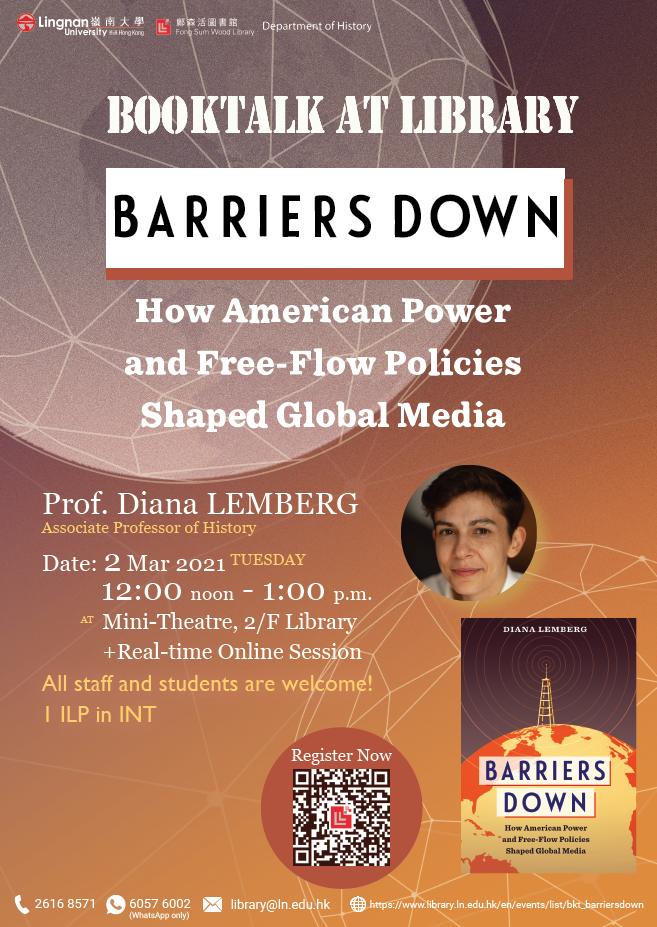 The Library has organised a Booktalk together with the Department of History. In the booktalk, Prof. LEMBERG introduced her book “Barriers Down: How American Power and Free-Flow Policies Shaped Global Media” and shared her insight with us.

In the book, Prof. LEMBERG explores the ideas of “freedom of information” that emerged in the 1940s and reveals its unexpected origins in political, economic, and cultural battles. These ideas reshaped and influenced the world. Besides, Prof. LEMBERG analyses the U.S. government’s promotion of ideas “free flow of information” by various new media ranging from television and satellite broadcasting to global English.

Freedom of information is a principle commonly associated with the United States’ First Amendment traditions or digital-era technology boosters. Barriers Down reveals its unexpected origins in political, economic, and cultural battles over analog media in the postwar period. Diana Lemberg traces how the United States shaped media around the world after 1945 under the banner of the “free flow of information,” showing how the push for global media access acted as a vehicle for American power.

Barriers Down considers debates over civil liberties and censorship in Nazi Germany, the Soviet Union, and elsewhere alongside Americans’ efforts to circumvent foreign regulatory systems in the quest to expand markets and bring their ideas to new publics. Lemberg shows how in the decades following the Second World War American free-flow policies reshaped the world’s information landscape, though not always as intended. Through burgeoning information diplomacy and development aid, Washington diffused new media ranging from television and satellite broadcasting to global English. But these actions also spurred overseas actors to articulate alternative understandings of information freedom and of how information flows might be regulated. Bridging the historiographies of the United States in the world, human rights, decolonization and development, and media and technology, Barriers Down excavates the analog roots of digital-age debates over the politics and ethics of transnational information flows.